Look at the Wind 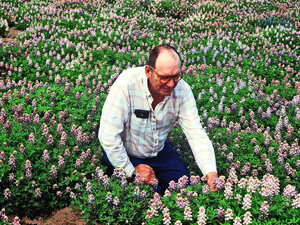 hen the pink and blue bonnets scent the spring,
and the poppies begin to sigh;

When the larkspur bunny hops along,
and the petunia blooms are nigh;

hen the Chinese trumpet sounds his horn,
and the mascagnia begins to fly;
When the rose of summer sings his song,
I'll look at the wind and cry.

hen the oxblood lily paints the ground,
and the pistache colors the sky;
When the pomegranate fruit falls to the earth,
and the pears are strewn from high;

hen the cold of winter harvests the flowers,
and the paperwhites ask "Why?";
When the sweet olive says "But I'm still here",
I'll look at the wind and cry.